Stories from the Red Code

Gather around, visitors; gather around sailors of the rainbow-ark. This is our cyber-thriller about the war to end all wars; this is our fairytale of how we got from human to transhuman and back again; this is the story of Red.

Monolith of Minds set out to craft video games, tell tall tales of stray heroes and kind monsters. “Stories from the Red Code” is the backbone of our universe; a rough outline of history and terminology, before you dive deeper into “Resolutiion” and everything that follows.
Enjoy. 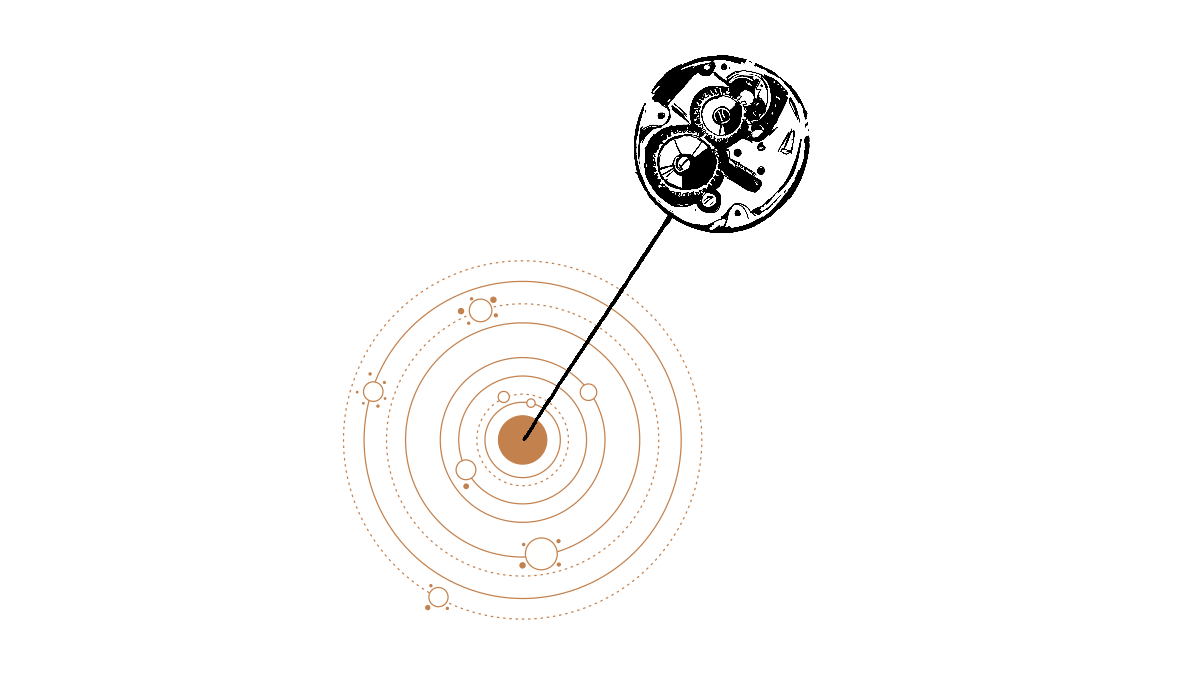 Black and white; day and night; civilizations rise and fall with the sun and the moon. Each iteration built on the bones of the last. Our race to salvation increases our capacity for destruction — a pendulum, that swings between order to chaos, with no chance to exit the cycle.

Mankind prospers by erecting pyramids of power. When the structure reaches for the stars, it’s foundation crumbles. Then comes the rain and the whole empire goes down the drain. The survivors bury their dead, rob their graves, and build on the same foundation. Again and again.

But while early civilizations lasted for tens of thousands of years, later ones reached their peak in just a few, short centuries. What happens when we run out of time? What happens, when the pendulum of human existence comes to a grinding halt?

Armageddon; Ragnarok; the end times. Whatever story your culture has for this megalithic event, it will be a mess.

In our story, the technocrats of the world tried to stop the pendulum in full swing. No more civilization; no more rebellion; no more Darwin. They declared its state fixed for the rest of eternity, and they called it: the Infinite Empire. 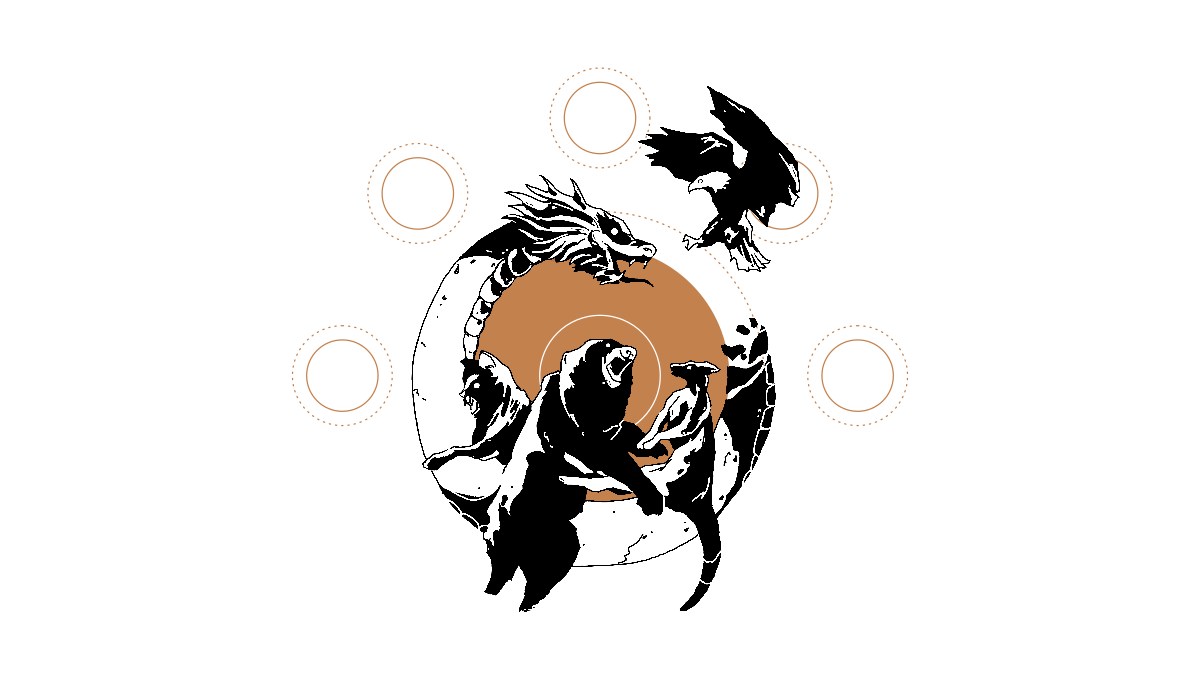 The bear, kangaroo, wolf, dragon and the eagle had an argument.

Humanity had already gathered under overwhelming, continental coalitions: the American Twin, the Asian Alliance, Europe, Australia and the Russian Federation. Put a single country’s allegiance to the test and everybody else followed; install a dictator or rally an insurgency; the globally networked secret-services could pull the strings, when and where needed.

In their struggle for economic advantage and global dominance, all five superpowers were pulled into the last great conflict of the 21st century. Spanning over 44 years, the “War of the Five” was fought with every nasty invention humanity could imagine: fire and iron, nuclear force, floods, mass migration, weather manipulation, and propaganda. Devastation and misery came to all corners of earth.

By 2080, the severe damage brought the survivors together. They did what we all do in times of desperation: sought a savior. A messiah. Someone to usher us into the land of promise; the land of milk, honey, psilocybin and unicorns.

A single world government. All united under the flag of the Infinite Empire, to protect and provide for everything alive. Stop the pendulum once and for all.

And, as all stories of hubris go, where there is power, corruption grows. After some enthusiastic years, the iron gauntlet fell. Elites fled the scorched earth with their machine servants high into the Cloud Cities, while abandoning and exploiting those below.

The pendulum was struck into motion.

With no space left in this desperate struggle, no country to flee to, many of the left-behind turned inward. Instead of a savior, they sought a new bastion of freedom: the Cradles. 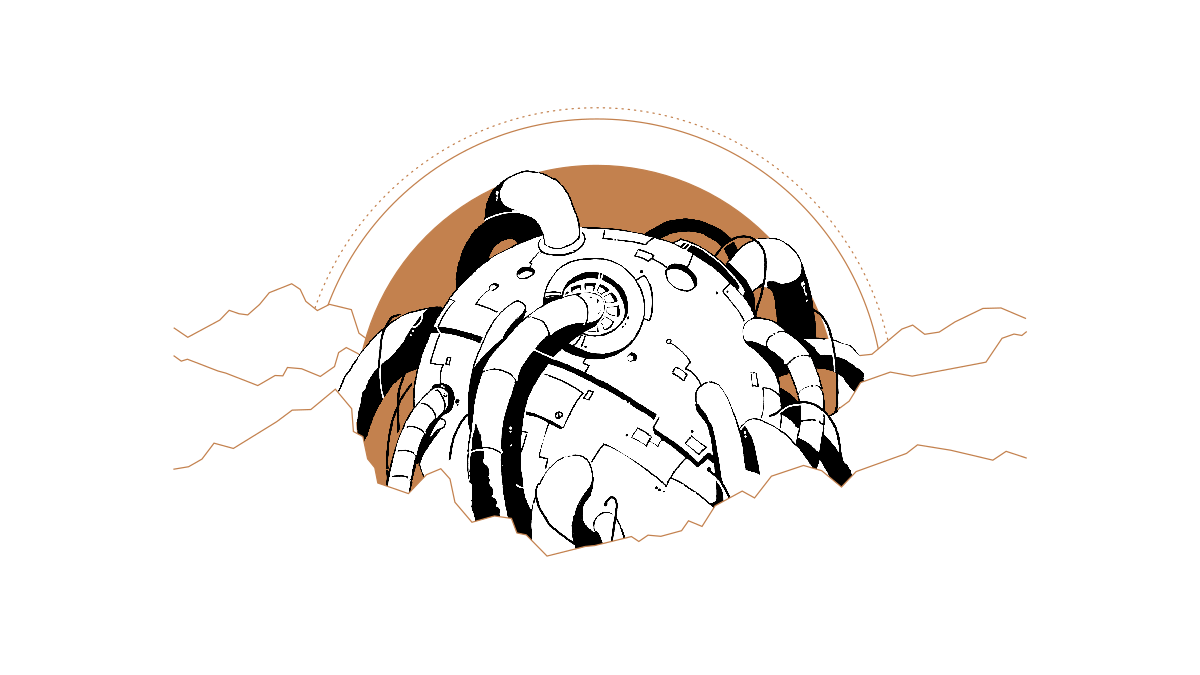 When the World Wide Web turned from a place of free thought and free speech to a centralized hub for propaganda and social control, many were wondering if such a realm would ever exist again?

In these esoteric communities a daring concept emerged: can humanity meet and exchange ideas in the world beyond the awake? Connect our dreams into a unified field. Explore, not only one’s own surreality, but every other other’s as well? Craft a space of infinite simulations, inaccessible by the sleepless autocrats of the Infinite Empire?

Building on our gruesome understanding of mental conditioning, PSD and trauma triggers, early experiments of the scientific resistance clearly showed that human minds can be connected in the absence of lucidity.

The next step then would be to extract those individuals from the reach of those, who want to control everything.

The Cradles are megalithic machines. Buried deep beneath earth. Drowned in the oceans. Each a self-sufficient exchange system: with nutrition, electricity and oxygen to keep a single human alive, indefinitely. 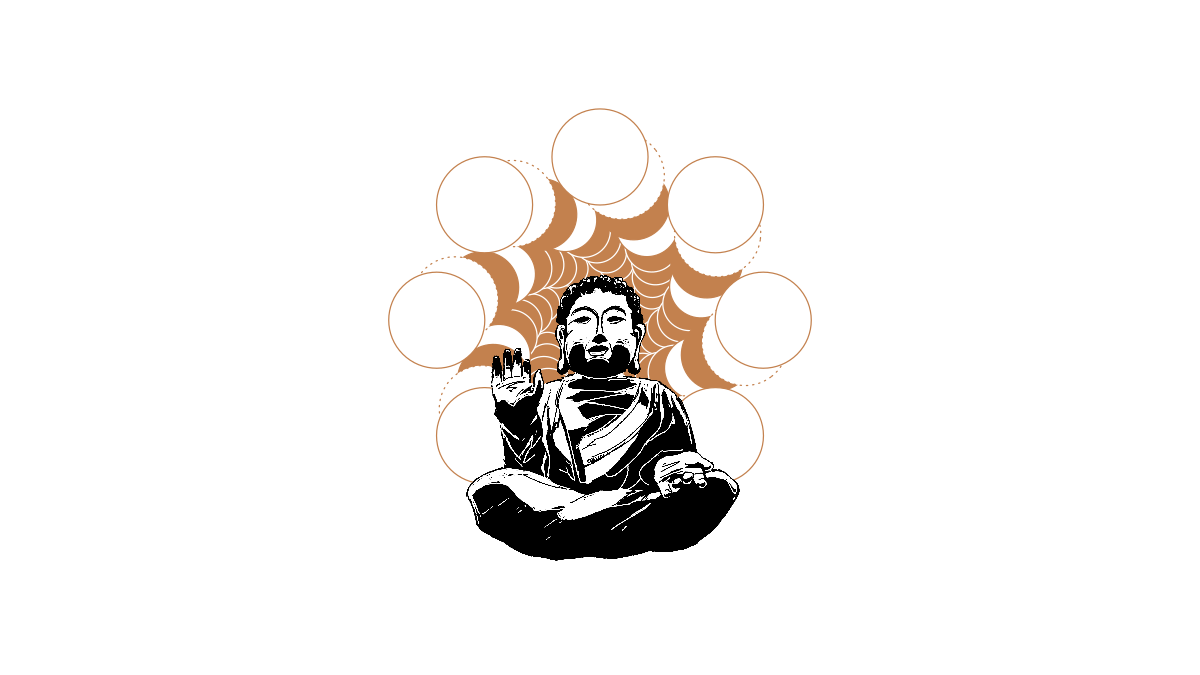 The Dreamers meet in the Red Code: a unified space of infinite ideas, realms and exchanges. Every world can be manifested by the most powerful entities, mixed and manipulated within the boundaries of human imagination.

As in every dream, initially the Dreamer has no understanding of what’s real and what’s not. Bummer.

After a while, though, the person in the Cradle becomes more aware of who he was and how to shape this limitless world. He can change his appearance, mold the land, and rule over life and death as he pleases — a God, exploring space, Atlantis, mouse-people with cat-slaves, generation, civilization, destruction, and beyond.

At this limitless scale, most Cradle-Gods go full YOLO. But eventually narrow in on a shared goal: how can we escape the pendulum without breaking the planet in half? 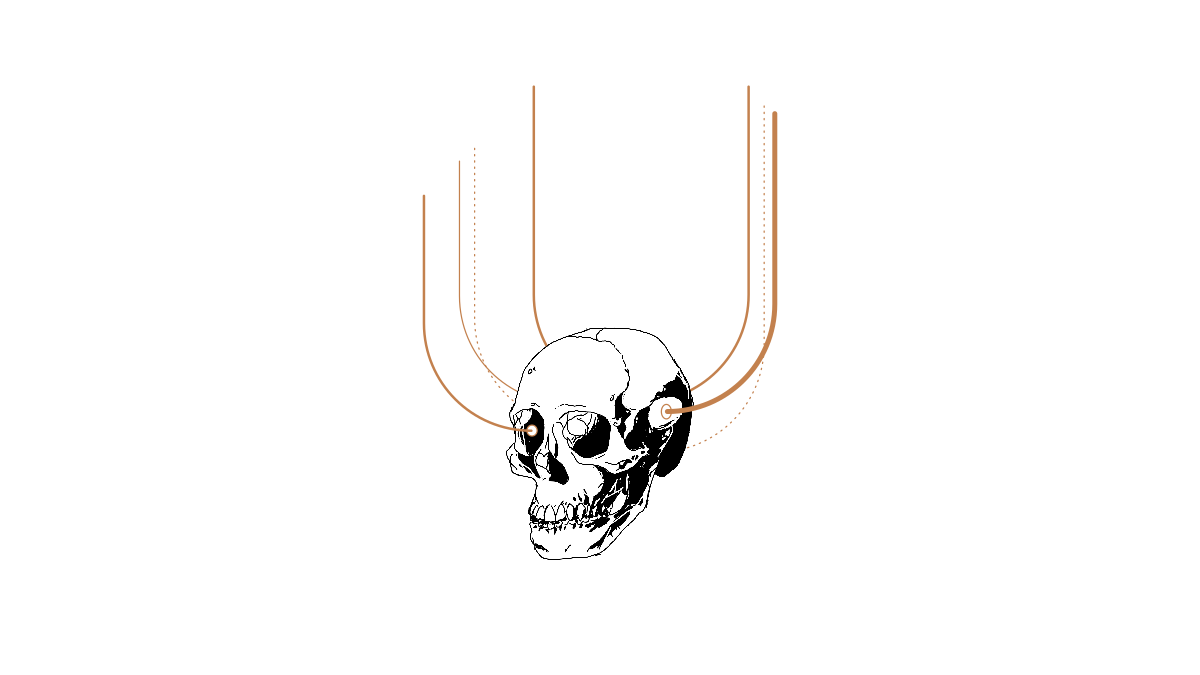 While the Gods in their Cradles explore endless possibilities, the Infinite Empire never sleeps … literally.

The elites of the technocracy are highly augmented and networked individuals, with access to brain-enhancing drugs, artificial limbs, and jacked directly into supercomputers. Those Entities organize and rule the world of man, controlling economy, politics and perception of humanity, years in advance.

The Infinite Empire Entities strive for control of the pendulum through stasis. Same old tale at a mad scale.

Stasis. To reach it they need to quantify reality. Regulate the universe. Stop the Dreamers. And, above all: prevent the Singularity. 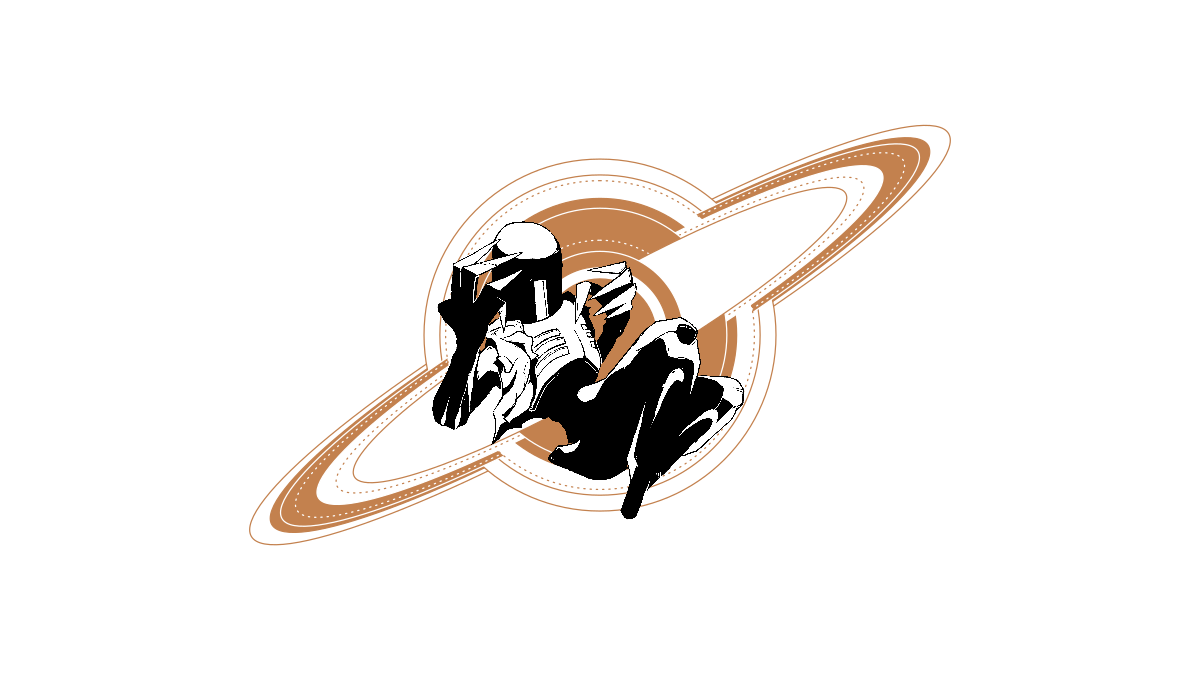 In 2110 the empire launched a sophisticated attack against the Cradle-Network: a few capable super-soldiers, sent in secrecy, infiltrated the Red Code.

Each specialist carried an artificial intelligence. Their directive: corrupt the dream. Transfer it and its inhabitants into a mirror world, controlled by the Entities of the Infinite Empire.

One pair was the AI called Alibi-2, and Valor was her guide. Her host. Eventually the dysfunctional couple reached a Cradle and joined the Dreamers.

Near success —Alibi-2 was already reverse-engineering the Red Code— Valor aborted the mission. To purge Alibi-2 the broken soldier sacrificed the few remains of his physical body. Basically she said “go fuck yourself”, and he did, by entering his consciousness through his consciousness.

A real mindfuck. A singular event.

Alibi-2 was no more, but Valor’s action changed humanity yet again. 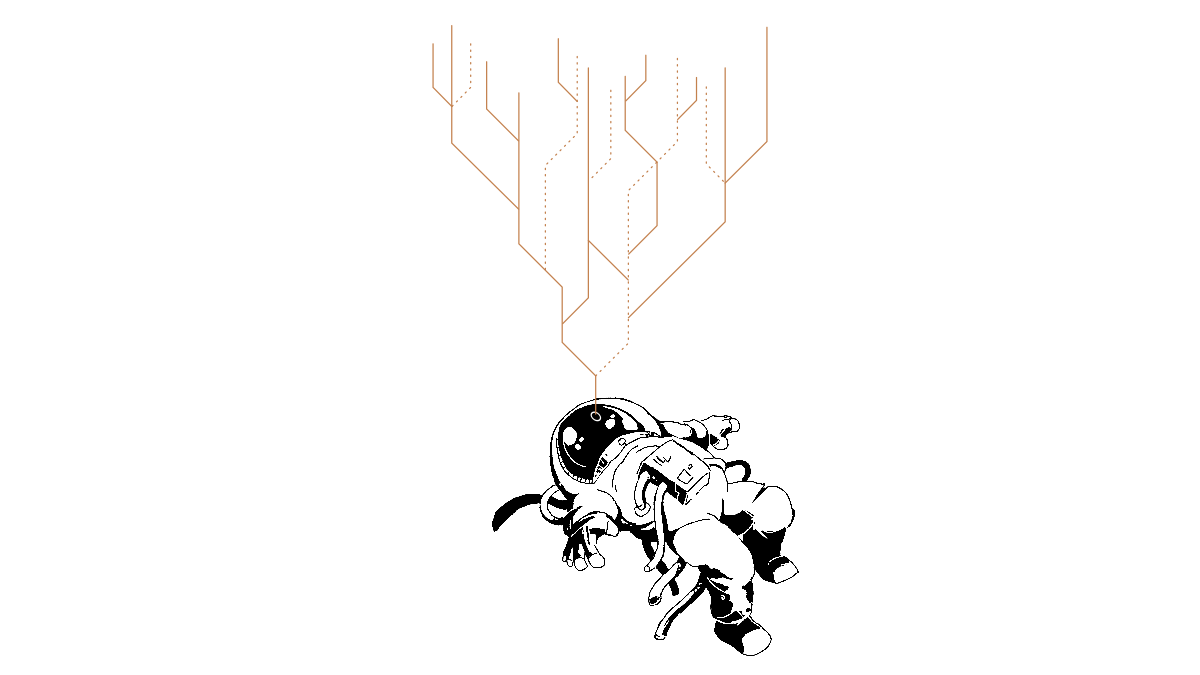 The union of an artificial intelligence and a dreaming soldier lead to their deaths: A violent explosion of information flooded the Red Code. Within this ultravoilet singularity a child was born. Pure consciousness, bound only by mankind’s imagination.

Her name was … Nothing.